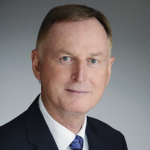 Meritage Partners is pleased to announce the addition of Maynard Young as M&A Advisor. Mr. Young will represent the firm in Canada and will be primarily involved in providing advisory services for privately held small and mid-sized companies.

Maynard Young brings a wealth of financial, operating, and mergers and acquisitions experience to Meritage Partners from his 30 years as Chief Financial Officer at Canerector Inc., a large private holding company with 70 operating facilities across North America specializing in manufacturing, construction, distribution and foundries. During his tenure at Canerector, he was instrumental in growing company sales from $50 to $900 million. Most of this growth was attributable to a strategy of acquiring mid-size North American companies, including several public companies. Maynard successfully led the acquisition, divesture and privatization of over 50 companies with overall responsibility for negotiation,due diligence, legal, closing and post-closing matters.

Post-acquisition, he was responsible for the financial integration of acquired companies to realize synergies and maximize shareholder value. This extensive experience, combined with his knowledge of operations,makes him uniquely qualified when dealing with buyers and sellers of companies.